The approved agreement, which was also signed by Vote Solar, The CLEO Institute and Federal Executive Agencies, will phase in new rates starting in 2022 and supports continued long-term investments in infrastructure, clean energy and innovative technology – including the largest solar buildout in the United States. FPL projects typical residential customer bills will remain well below the national average through the end of 2025.

"Backed by multiple consumer and environmental groups, this comprehensive agreement benefits all 5.6 million FPL customers and our state by keeping bills low and accelerating investments in clean energy," said FPL President and CEO Eric Silagy. "Florida is a rapidly growing state on the front lines of climate change and our customers deserve bold, decisive, long-term actions as we continue building a more resilient and sustainable energy future all of us can depend on, including future generations. This agreement paves the way for FPL to continue delivering America's best energy value – electricity that's not just clean and reliable, but also affordable."

FPL's new four-year rate plan directly supports the company's groundbreaking "30-by-30" plan to install 30 million solar panels in Florida by 2030, which remains ahead of schedule and under budget. In doing so, the agreement will also expand the company's highly popular FPL SolarTogetherTM program – more than doubling what's already the largest community solar program in the country across an FPL service area that spans from Miami to Pensacola(1). In all, the approved settlement agreement supports the development of 16 million solar panels across more than 50 new sites – enough to power approximately 1 million homes with clean, emissions-free energy from the sun.

Other components of the approved agreement:

The unanimous PSC decision is the culmination of the customary, nearly year-long process of reviewing and setting new electric base rates. This included 12 public hearings in June and July, as well as FPL's production and filing of nearly 100,000 pages of documents, including direct and rebuttal testimony, depositions under oath, and responses to thousands of discovery requests from PSC staff and intervening parties. During a public PSC hearing in September, a panel of FPL witnesses provided sworn testimony and responded to questions regarding the rate agreement.

Continually improving fuel efficiency of power plant fleet
The approved rate agreement supports continued clean energy investments that have drastically improved the fuel efficiency of FPL's power plant fleet and reduced the fuel portion of customer bills over the last two decades by billions of dollars. This includes modernizing old, inefficient power plants with ultra-efficient clean energy centers that use less fuel to generate electricity, as well as developing zero-emissions solar energy centers that do not use fuel at all.

Since 2001, investments to modernize FPL's state-of-the-art power plant fleet have improved fuel efficiency nearly 30%, saving customers more than $11 billion in fuel the company simply did not need to purchase. 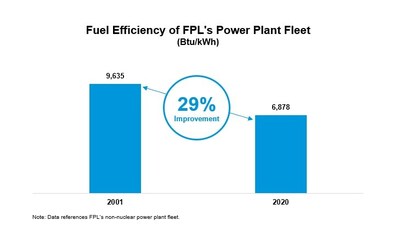 Even with FPL's continued investments to improve the fuel efficiency of its power plants, customer bills are affected by volatile natural gas market conditions. Natural gas prices have increased sharply in 2021 due to increased global demand and supply restrictions. Fuel accounts for more than 35% of the expected total bill increase in 2022. This estimate is based on fuel projections FPL filed for approval with the PSC in September in a proceeding separate from the rate case proceeding and the approved settlement agreement.

Based on the approved rate settlement agreement and FPL's current projections for fuel and other clauses, the standard 1,000-kWh typical monthly residential bill benchmark would be:

Since the September fuel filing, natural gas prices have continued to increase. FPL is closely monitoring the market and will notify the PSC in November regarding any adjustments to the company's 2022 fuel projection.

Information for customers in Northwest Florida
The approved agreement will unify the rates and tariffs of FPL and Gulf Power. In recognition of the initial difference in the costs of serving the existing FPL and Gulf Power customers, the settlement agreement will implement a transition rider/credit mechanism to address those differences in a reasonable manner for all customers. The transition rider/credit will decline to zero over a five-year period, at which point rates would be fully aligned by Jan. 1, 2027. Under the approved settlement agreement, a typical 1,000-kWh residential customer bill in Northwest Florida is projected to be lower at the end of 2025 than it is today.

Based on the approved rate settlement agreement and FPL's September filing for fuel and other clauses, the standard 1,000-kWh typical monthly residential bill benchmark in Northwest Florida would be:

Typical business customer bills in Northwest Florida are expected to grow at an average annual rate of up to 1.7%, depending on rate class, and remain below the national average.

Florida Power & Light Company
Florida Power & Light Company is the largest vertically integrated rate-regulated electric utility energy company in the U.S. as measured by retail electricity produced and sold. The company serves more than 5.6 million customer accounts supporting more than 11 million residents across Florida with clean, reliable and affordable electricity. FPL operates one of the cleanest power generation fleets in the U.S and in 2020 won the ReliabilityOne® National Reliability Excellence Award for the fifth time in the last six years. The company was recognized in 2020 as one of the most trusted U.S. electric utilities by Escalent for the seventh consecutive year. FPL is a subsidiary of Juno Beach, Florida-based NextEra Energy, Inc. (NYSE: NEE), a clean energy company widely recognized for its efforts in sustainability, corporate responsibility, ethics and compliance, and diversity, and has been NextEra Energy is ranked No. 1 in the electric and gas utilities industry in Fortune's 2021 list of "World's Most Admired Companies," and recognized on Fortune's 2021 list of companies that "Change the World." NextEra Energy is also the parent company of NextEra Energy Resources, LLC, which, together with its affiliated entities, is the world's largest generator of renewable energy from the wind and sun and a world leader in battery storage. For more information about NextEra Energy companies, visit these websites: www.NextEraEnergy.com, www.FPL.com, www.NextEraEnergyResources.com.