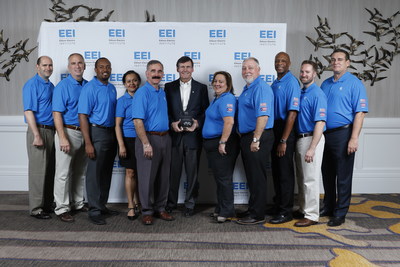 "Words cannot describe the pride we at FPL have for our dedicated employees who volunteered to leave their families for weeks, and in some cases months, to get the lights back on for our neighbors in Puerto Rico," said FPL President and CEO Eric Silagy. "What has stuck with all of us is the warmth and graciousness of those in the Commonwealth who were without electricity for so long. Despite their own very real challenges, they welcomed us into their homes from day one. Their resiliency and positive spirit fueled our employees during long, strenuous work days, so much so that it inspired our teams to often give back once their 16-hour workday was complete. This mission was about more than simply restoring electric service. This was about helping our fellow Americans in their greatest time of need."

FPL's team of more than 400 men and women worked for nearly 200 days, restoring power to approximately 30,000 homes in the aftermath of Hurricane Maria. FPL's support of the restoration effort began even before the company completed its own restoration to 4.4 million customers following the unprecedented Hurricane Irma in September, quickly identifying a team of restoration professionals who were prepared to deploy to Puerto Rico. The company coordinated the delivery of power poles and other electric equipment to the island and accompanied Florida Gov. Rick Scott to the Commonwealth in November. Then, a 10-person Incident Management Team began working on the island in December to coordinate restoration efforts in Bayamon, one of seven regions on the island. In January, the first of three waves of FPL lineworkers, management and support staff joined the team to start restoring service in the field. Some employees volunteered to remain in Puerto Rico for three straight months, working 16-hour days on a schedule of 30 days on, one day off.

Electric companies from the mainland that provided mutual assistance to the Puerto Rico Electric Power Authority (PREPA) faced incredibly challenging and complex restoration work because extensive portions of Puerto Rico's energy grid are in rugged, mountainous terrain that has little or no road access. Getting crews and equipment to Puerto Rico also was much more complicated and time-intensive than deploying mutual assistance on the mainland, and it required extensive coordination among responding companies.

"The power restoration effort in Puerto Rico was a massive and unprecedented mission, and electric companies from across the country, including FPL, responded to the call for help," said EEI President Tom Kuhn. "The electric power industry pulled together with one goal in mind, to restore power to the people of Puerto Rico—it truly was one team, one mission. FPL is deserving of this recognition for providing tremendous support to PREPA and our fellow citizens in Puerto Rico."

On May 22, PREPA announced that power had been restored to 99 percent of its customers across the island who can receive electricity. This is a significant milestone that was reached by PREPA and its restoration partners, including FEMA, the U.S. Army Corps of Engineers and its contractors, and industry mutual assistance crews. The resources, equipment, and people sent from the mainland, including lineworkers and support personnel sent by FPL, greatly accelerated the restoration process.

The company also was presented with EEI's "Emergency Assistance Award" for its support of power restoration efforts after a nor'easter and Tropical Storm Philippe impacted Maine in October 2017.

The Edison Electric Institute
EEI is the association that represents all U.S. investor-owned electric companies. Our members provide electricity for 220 million Americans, and operate in all 50 states and the District of Columbia. The electric power industry supports more than 7 million jobs in communities across the United States. In addition to our U.S. members, EEI has more than 60 international electric companies as International Members, and hundreds of industry suppliers and related organizations as Associate Members.

Florida Power & Light Company
Florida Power & Light Company is the third-largest electric utility in the United States, serving nearly 5 million customer accounts or an estimated 10 million+ people across nearly half of the state of Florida. FPL's typical 1,000-kWh residential customer bill is approximately 30 percent lower than the latest national average and among the lowest in the U.S. FPL's service reliability is better than 99.98 percent, and its highly fuel-efficient power plant fleet is one of the cleanest among all utilities nationwide. The company was recognized in 2017 as one of the most trusted U.S. electric utilities by Market Strategies International for the fourth consecutive year. A leading Florida employer with approximately 8,700 employees, FPL is a subsidiary of Juno Beach, Florida-based NextEra Energy, Inc. (NYSE: NEE), a clean energy company widely recognized for its efforts in sustainability, ethics and diversity, and has been ranked No. 1 in the electric and gas utilities industry in Fortune's 2018 list of "World's Most Admired Companies." NextEra Energy is also the parent company of NextEra Energy Resources, LLC, which, together with its affiliated entities, is the world's largest generator of renewable energy from the wind and sun. For more information about NextEra Energy companies, visit these websites: www.NextEraEnergy.com, www.FPL.com, www.NextEraEnergyResources.com.