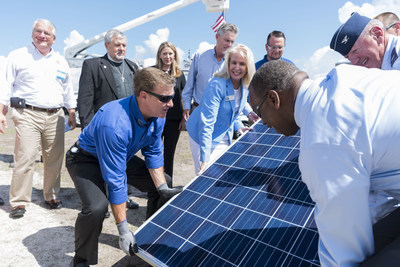 The Treasure Coast facilities are part of one of the largest solar expansion plans ever in the eastern U.S., as FPL constructs and places into service a total of eight new solar power plants by early 2018. Combined, the new solar power plants are comprised of more than 2.5 million solar panels with nearly 600 megawatts of solar capacity – enough energy to power 120,000 homes.

"Today is another important milestone in our unprecedented solar expansion, as we continue to layout the blueprint for delivering clean energy and outstanding service while keeping energy bills among the lowest in the nation," said Eric Silagy, FPL's president and CEO. "Installing the first of 1 million new solar panels for our Treasure Coast customers is just the beginning of our mission to fast track the benefits of solar energy to more Floridians quicker and more affordably than ever before."

The company plans to build all of the new universal solar capacity cost effectively – meaning that these investments will result in net savings for FPL customers over and above the cost of construction. FPL estimates the eight new plants will generate millions of dollars in net lifetime savings for its customers.

"FPL continues to rethink the way we view energy in Florida," said Senate President Joe Negron. "The company's cost-effective solar expansion not only brings the benefits of clean solar energy to everyone, it also acts as a major economic driver by creating hundreds of construction jobs in our communities."

Construction of solar power plants happens in stages – starting with land clearing, installing pilings and racking, and finally installing photovoltaic (PV) panels and hooking them up to the energy grid. FPL expects the construction workforce across all eight sites to grow to approximately 1,500 during the peak activity this summer.

"These new Treasure Coast solar power plants represent more than just affordable clean energy – they demonstrate FPL's commitment to doing what's right for our community," said Florida Senator Debbie Mayfield. "I'm proud to welcome nearly 1 million solar panels to the Treasure Coast, and I hope we can continue to work with FPL to expand our solar footprint here in Florida."

Through a partnership with Veterans Florida, Indian River State College and others, FPL is connecting U.S. military veterans with careers in solar. Veterans are not only helping to build the company's eight new solar sites in 2017, they will also play an important role in building even more solar projects in the years ahead.

FPL is also partnering with Audubon Florida to advance solar energy while improving the environmental values of the land where the solar plants are sited. Audubon and its local chapters are recommending bird and pollinator-friendly vegetation for the solar plants to help make these facilities home to wildlife and nature.

"We're working with FPL to advance solar energy in Florida while conserving precious water resources and protecting our environment," said Eric Draper, executive director of Audubon Florida. "Partnerships like this are what make Florida such a great place to live, and we're proud to have such a good corporate citizen like FPL to work with to ensure that solar benefits local communities."

The eight new FPL solar plants under construction and their expected completion dates are:

More information about solar in Florida and FPL's solar investments

Florida ranks ninth in the nation for solar resource – the strength of the sun's rays – making it a great place for solar. One of the cleanest electric utilities in the nation, FPL projects that solar will outpace coal and oil combined as a percentage of the company's energy mix by the year 2020.

In 2016, FPL became the first company to build solar cost effectively in Florida, leveraging its purchasing power and sites with key advantages to complete three 74.5-megawatt universal solar power plants that are projected to result in net customer savings over their operational lifetimes.

From 2017 through 2023, FPL plans to add nearly 2,100 new megawatts of solar, including the approximately 600 megawatts currently under construction.

FPL has been studying and operating solar in Florida for more than three decades. In 1984, FPL commissioned its first universal solar installation, a 10-kilowatt PV facility in Miami that helped the company's employees gain experience with the then-emerging technology. Over the years, FPL has continued to test and operate a wide variety of solar technologies. In 2009, the company built the 25-megawatt FPL DeSoto Next Generation Solar Energy Center, which was the largest solar PV power plant ever built in the U.S. at the time.

Today, the company operates more than 335 megawatts of solar generating capacity throughout the state:

In addition, FPL has installed small-scale solar arrays for more than 100 Florida schools and other educational facilities. For more information, visit www.FPL.com/solar.

Florida Power & Light Company is the third-largest electric utility in the United States, serving approximately 4.9 million customer accounts or an estimated 10 million people across nearly half of the state of Florida. FPL's typical 1,000-kWh residential customer bill is approximately 25 percent lower than the latest national average and, in 2016, was the lowest in Florida among reporting utilities for the seventh year in a row. FPL's service reliability is better than 99.98 percent, and its highly fuel-efficient power plant fleet is one of the cleanest among all utilities nationwide. The company received the top ranking in the southern U.S. among large electric providers, according to the J.D. Power 2016 Electric Utility Residential Customer Satisfaction StudySM, and was recognized in 2016 as one of the most trusted U.S. electric utilities by Market Strategies International. A leading Florida employer with approximately 8,900 employees, FPL is a subsidiary of Juno Beach, Florida-based NextEra Energy, Inc. (NYSE: NEE), a clean energy company widely recognized for its efforts in sustainability, ethics and diversity, and has been ranked No. 1 in the electric and gas utilities industry in Fortune's 2017 list of "World's Most Admired Companies." NextEra Energy is also the parent company of NextEra Energy Resources, LLC, which, together with its affiliated entities, is the world's largest generator of renewable energy from the wind and sun. For more information about NextEra Energy companies, visit these websites: www.NextEraEnergy.com, www.FPL.com, www.NextEraEnergyResources.com.