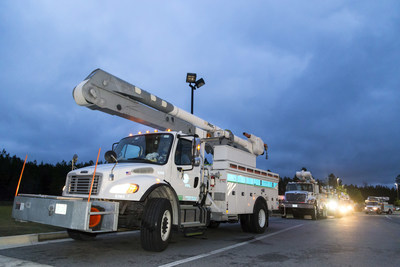 "FPL is pleased to help our partner utilities in their time of need, just as they often provide assistance to our company when FPL customers are impacted by a hurricane, tropical storm or other natural disaster, such as last year's Hurricane Matthew," said Eric Silagy, president and CEO of FPL. "Regardless of the time of year, FPL is always on call to support our colleagues at other utilities."

Out-of-state utility workers played a critical role in restoring service to 1.2 million FPL customers following Hurricane Matthew last October. Coupled with a stronger, smarter energy grid, these workers – from as far away as Massachusetts and Texas – helped FPL restore service to 98 percent of its customers within two days of Matthew exiting Florida.

The FPL workforce traveling to Long Island, including 120 FPL lineworkers and 200 contractors and support staff from across Florida, began its more than 1,000-mile journey Monday afternoon. FPL crews will remain on the job for as long as their assistance is needed.

In the past, FPL has provided assistance to areas impacted by major weather events, including the deployment of approximately 1,000 FPL workers to the Northeast in the aftermath of Superstorm Sandy in 2012.

Florida Power & Light Company
Florida Power & Light Company is the third-largest electric utility in the United States, serving approximately 4.9 million customer accounts or an estimated 10 million people across nearly half of the state of Florida. FPL's typical 1,000-kWh residential customer bill is approximately 25 percent lower than the latest national average and, in 2016, was the lowest in Florida among reporting utilities for the seventh year in a row. FPL's service reliability is better than 99.98 percent, and its highly fuel-efficient power plant fleet is one of the cleanest among all utilities nationwide. The company received the top ranking in the southern U.S. among large electric providers, according to the J.D. Power 2016 Electric Utility Residential Customer Satisfaction StudySM, and was recognized in 2016 as one of the most trusted U.S. electric utilities by Market Strategies International. A leading Florida employer with approximately 8,900 employees, FPL is a subsidiary of Juno Beach, Florida-based NextEra Energy, Inc. (NYSE: NEE), a clean energy company widely recognized for its efforts in sustainability, ethics and diversity, and has been ranked No. 1 in the electric and gas utilities industry in Fortune's 2017 list of "World's Most Admired Companies." NextEra Energy is also the parent company of NextEra Energy Resources, LLC, which, together with its affiliated entities, is the world's largest generator of renewable energy from the wind and sun. For more information about NextEra Energy companies, visit these websites: www.NextEraEnergy.com, www.FPL.com, www.NextEraEnergyResources.com.